LenDenClub > Times of India: RBI to regulate P2P lenders as non-banking finance cos

Times of India: RBI to regulate P2P lenders as non-banking finance cos

Times of India: RBI to regulate P2P lenders as non-banking finance cos

Mumbai: The government has notified the Reserve Bank of India (RBI) as the regulator for peer-to-peer (P2P) lending platforms that have been classified as non-banking finance companies (NBFCs). While this could increase costs for online lenders through compliance requirements, most have welcomed the move stating that it gives them recognition.

P2P lending, or crowdsourcing for loans, are a recent innovation where financial technology (fintech) companies pool funds from individuals and lend it to businesses, disintermediating banks. The P2P platforms, which do not take any credit risk on their own, use software and data analytics to gauge creditworthiness of borrowers. They are different from Sebi-regulated collective investment schemes as the money raised is always in the form of debt.

A senior RBI official had said last week that the central bank was waiting for the government notification, following which it would come out with regulations for this segment. Last year in April, the RBI had said in a consultative paper that P2P lenders have the potential to reach those borrowers which traditional lenders cannot. Also, it saw these entities providing cheaper loans on the back of their lower operational costs. RBI regulations for lenders typically include capital requirements, exposure norms, income recognition norms and limits on borrowing. 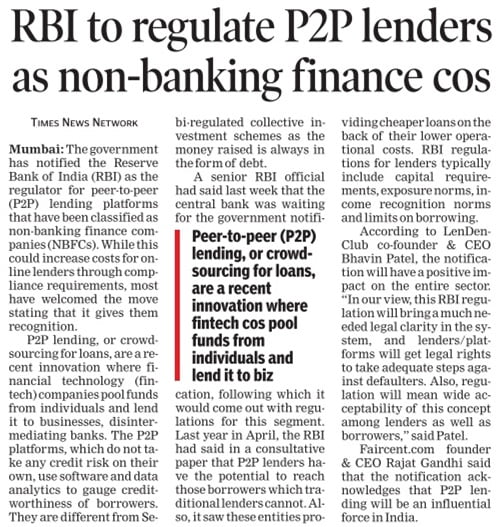 According to LenDenClub co-founder & CEO Bhavin Patel, the notification will have a positive impact on the entire sector. “In our view, this RBI regulation will bring a much needed legal clarity in the system, and lenders/platforms will get legal rights to take adequate steps against defaulters. Also, regulation will mean wide acceptability of this concept among lenders as well as borrowers,” said Patel.

Faircent founder & CEO Rajat Gandhi said that the notification acknowledges that P2P lending will be an influential force in India. “It will help in greater credit access for SMEs and micro SMEs, which hitherto were either denied access or were under-served by traditional financial institutions. Moreover, it would broaden avenues for lenders,” said Gandhi.

In a recent report, KPMG said that fintech lenders are evolving into banks, giving traditional players a run for their money. These include Swedish payments firm Klarna that got a bank licence, and Dutch payments firm Adyen which too received a pan-European banking licence in Q2 2017. UK-based Zopa announced in November 2016 that it was applying for a banking licence this quarter. “These are seen as logical next steps for established or maturing fintechs, and will likely enable them to pursue further growth through expansion of their business models,” the report said.

Bloomberg: In Game Of Loans, RBI Arms A New Player